Today we are delighted to share a personal story from our friend Anne Derman. She shared this story about her experiences recording doctor appointments, and was kind enough to allow us to share it.

Three years ago, my horse slipped mid-gallop. My last memory was the sound of my helmet cracking against asphalt, and then snippets from the emergency room. When I confided in my doctor that I had lingering memory troubles, he suggested a test to figure out exactly where things in my brain were going haywire.

Then I walked out of his office and promptly forgot what he'd suggested. The irony of having to call and ask for a reminder on the memory test was not lost on either of us.

Had I recorded our appointment, however, the follow-up call would have been unnecessary. I never even thought to ask if I could record, though. That's strange because, as a journalist, I record almost all of my conversations.

I likely didn't think to ask if I could record because I didn't want to jeopardize that "perfect patient" relationship. Being a perfect patient is silly, though. You called the doctor because you were concerned about your health, not because you needed a friend. Furthermore, you're there to get information, and knowledge is only as good as your ability to remember it.

"The doctor and patient relationship is very tilted," explains Dan Gardner, MD, a San Diego-based psychotherapist. "You're motivated to be a 'good patient,' because your life is literally in their hands."

The thing is: Many of us struggle to recall what our doctors say. A 2012 study tested the medical recall of 755 patients given instructions about either wound care or taking medications. A full 40.5 percent could not remember how they were supposed to take a medicine 15 minutes later.

"For me, a recording is a chance for clarity, and a chance for a patient to understand a little bit better," says John Durant

"For me, a recording is a chance for clarity, and a chance for a patient to understand a little bit better," says John Durant, MD, a general practice physician based in Dadeville, Alabama. Physicians like Dr. Durant, who encourage patients to record their visits report better outcomes on things like prescription adherence and executing follow-up care. Data backs them up. A review of studies, found that recordings and transcripts improved recall of a doctor's visit.

There's a right way and a wrong way to record your doctor, though. Because many states require consent for recording, it's essential to ask before pulling out your phone. Explaining why you want to record is the next step. Some doctors may worry about saying the wrong thing. Explaining that this request is simply about helping you remember, you can likely put their mind at ease. If, in that moment, they're not quite ready to agree, that's fine too. Your doctor may need time to process the request.--especially if it's the first time they've been asked. Ask if they'll give it some thought for your next visit.

For me, recording my trips to the doctor has become an insurance policy against my faulty memory. I know that I'll be able to follow through on whatever instructions I'm given. But that's not the only reason to do it. For folks who want to have family involved in their care, using an app like Medcorder is an easy way to share info quickly. And: It creates a permanent record of your medical history. That's useful if you move, change practices, or just want to see exactly how long you've been trying to resolve an issue.

My memory will likely always be a little bit fritzy. That's just my new normal. But now, there is one thing I never forget: Asking if I can record any important conversation, including those with my doctor.

Thank you! Your submission has been received!
Oops! Something went wrong while submitting the form.
Get the latest posts delivered right to your inbox. 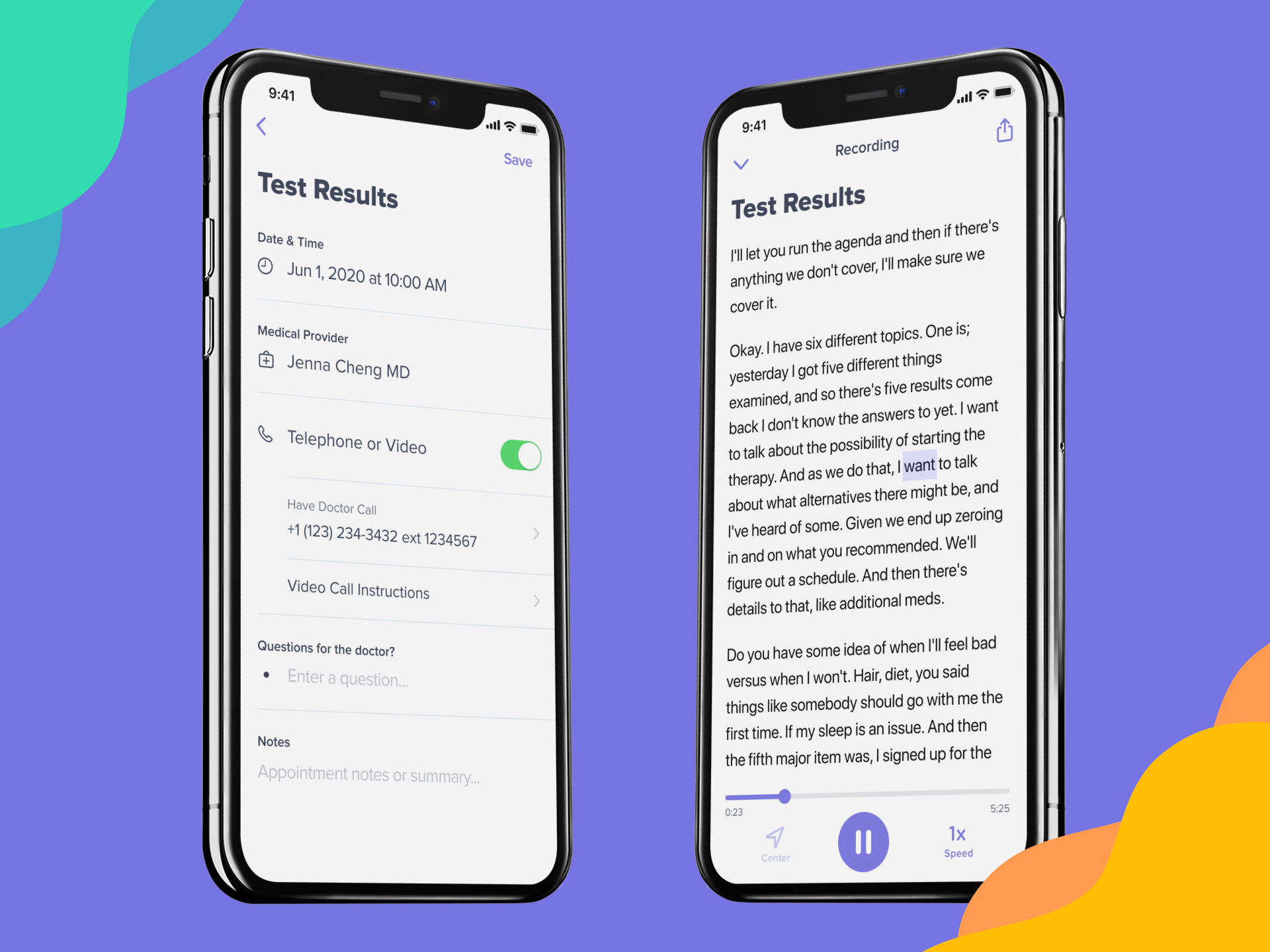 It’s no surprise that many doctor appointments are now happening over the phone, and we’ve been working hard to make Medcorder as helpful for telemedicine consultations as it is in person. With the latest version of Medcorder (Version 3.3), we’ve added a key new telemedicine feature: automatic appointment recording of calls from your doctor.  Read on for more on how it works, and other new features we've added! 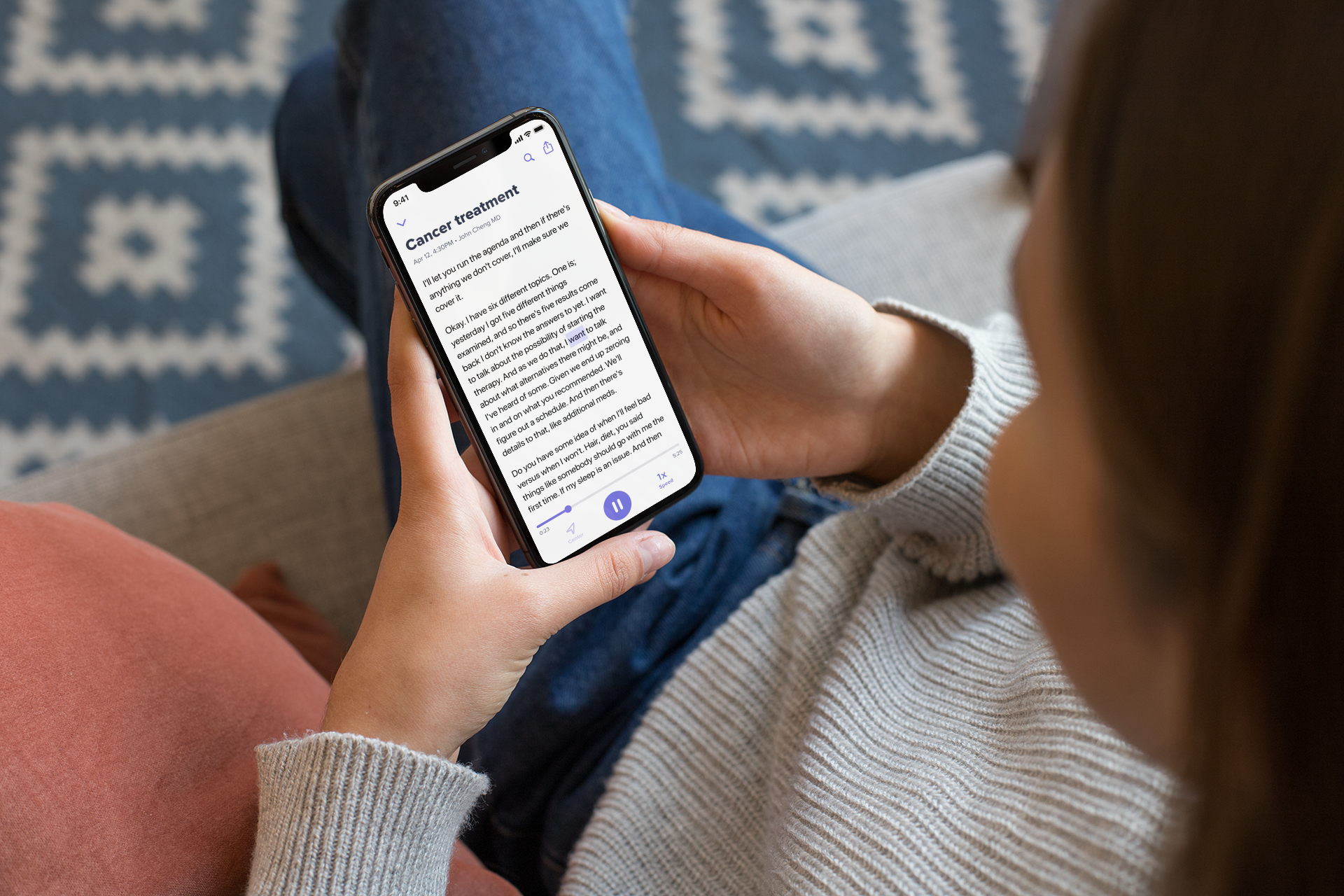 During these times of the Covid-19 Pandemic, we've heard many stories from the community of Medcorder users about how they're adapting and adjusting. Below we're happy to share Donna's story, which she generously shared with us. These are the kinds of stories we love to be able to tell.